There is a huge range of materials up for consideration when selecting a boardwalk or pedestrian bridge product, and a host of factors can influence the decision on what type of material to use—aesthetic appeal, longevity, and cost are among a few. An often overlooked factor that should be at the forefront of decision-makers’ minds is combustibility. 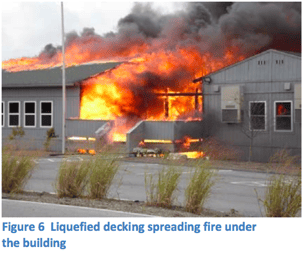 In October 2014, a fire at the Flight 93 National Memorial headquarters in Pennsylvania brought the importance of this decision to light. The fire tragically destroyed three buildings and a number of irreplaceable items, including photographs, personal mementos of the flight’s passengers and crew, and an American flag that flew over the U.S. Capitol on the day of the 9/11 terrorist attack. The Memorial pays tribute to the passengers and crew of United Airlines Flight 93, all of whom perished after fighting back against hijackers.

A Serious Accident Investigation Factual Report from The National Park Service (NPS) notes that the team believes, “that the fire began when discarded smoking material caught the mulch on fire, and then progressed into the deck structure, deck, and the buildings." Among other findings, the report points to the use of plasticized lumber decking connecting the buildings as having played a major part in hastening the spread of the fire and intensifying the blaze. As a result, the NPS has revised their manual on fire.

The report required urgent action, issuing a Servicewide Safecom on April 15, 2015, “drawing attention to the volatility of the plasticized lumber under certain conditions,” and addressing, “the conditions under which the material should not be used and/or replaced.”

The decking material used at the Memorial was a Tangent Technologies product made of High Density Polyethylene (HDPE). While it’s unclear exactly which Tangent product was used, all are made from HDPE. The Tangent product, Tandeck, for example has a melting point of 250°F, compared to paraffin wax used in candles which has a melting point of 150°F. The low melting point of the material caused it to behave like extra fuel to the fire. Combined with a flash point of 645°F (at which temperature the liquid material vaporizes into the air and becomes ignitable), and an autoignition temperature also of 645°F (where it will ignite even without a flame), the result can be catastrophic.

PermaTrak’s boardwalk system, as a precast concrete material, is considered noncombustible and is incredibly durable, even when faced with fire. NPS superintendents or facility managers in charge of maintenance may stand to benefit from the use of precast concrete vs. plastic-composite, as a different decking material could have limited the ignition and spread of fire at the Flight 93 National Memorial.

Click here to learn more about boardwalk fire resistance ratings and their importance when it comes to public walkways and avoiding disaster.

The NPS Structural Fire Reference Manual 58 requires parks to have a fire prevention program that includes annual fire and life safety inspections of all target hazard buildings, which are defined as “structures whose building materials and/or contents are combustible, whereby if a fire were to start, a significant loss or damage to the structure or its contents or loss of life could occur.” Parks are also encouraged to have “preincident plans” for all identified target hazards. These plans allow firefighters to develop operational plans to address the emergency quickly and minimize building deficiencies.

Which Multi Use Trail Materials Are Right for Your Project?

Our precast concrete system was created to address the maintenance, safety and longevity issues presented by timber and composite decking boardwalk structures. The PermaTrak system offers many features and benefits, making it superior to traditional wood and composite construction in numerous ways.