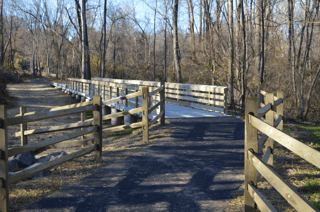 Whitpain Township’s master Trail Network Plan includes five different PermaTrak structures: three varying-sized boardwalks (all 9 ft. wide with 8 ft. of clearance, ranging in length from 24 to 300 linear feet (LF) at roughly 18 in. above grade), and two pedestrian bridges (both 9 ft. wide, one 12 LF and one 24 LF).

The PermaTrak boardwalks and pedestrian bridges are the first precast concrete boardwalks to be installed in Pennsylvania.

The largest three-phased trail included in the project is the Core Connector, which completes a loop around a network of trail systems within Whitpain Township and connects on either end to neighboring townships – a project roughly ten years in the making. 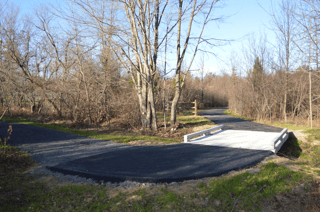 David S. Cavanaugh, RLA, ASLA of LandConcepts was the project’s lead designer and Whitpain Township served as the owner. This partnership began back in 2006 when both teams joined together to tackle a shared goal: creating a trail master plan that connected Whitpain’s green spaces, trail access points and neighborhoods.

To bring this momentous vision to fruition, the Whitpain project required multiple boardwalks along various parts of the trail to span the wooded wetland and floodplain areas. While pressure-treated wood and recycled composite boardwalk materials were initially considered, Cavanaugh was concerned about the toll the wetlands would take on those materials.

“This was the first precast concrete material we have used in the Whitpain area, and since the initial installation, everyone has been really happy with it,” Cavanaugh says.

To ensure a cost-effective PermaTrak installation, Whitpain Township purchased the PermaTrak boardwalk system directly to avoid contractor markup on the material, and set up an open bid for the labor to install the PermaTrak.

The Whitpain Township Trail Network Plan was finalized in 2013, concluding the grant project managed by LandConcepts Group, LLC and financed by the Community Conservation Partnerships Program. Additional funding was provided by Keystone Recreation, Park and Conservation Fund, Montgomery County, the PA Department of Conservation and Natural Resources (PA DCNR) and Whitpain Township itself.

The grant project centered on Phase II and Phase III of the Core Connector area, and aimed to accomplish several key goals:

The established Trail Network Plan also serves as a guide for future recreation and conservation decisions in the region.

The Core Connector and Crossways Trail – Uniting the Whitpain Community 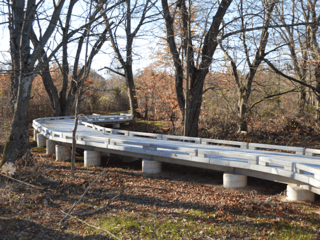 In the center of the Core Connector lies the Crossways Trail, a joint project between the two townships that has taken place over the past few years. This trail cuts directly through the center of Whitpain Township connecting Whitpain to Lower Gwynedd.

“The trail system provides a great inner connection between these townships. You can walk from home to school to the library to the park. It’s a significant loop style trail system that ties in really nicely with other trails, such as the Green Ribbon Trail, which runs along Wissahickon Creek,” Cavanaugh explains.

Another perk of the Whitpain project’s wide-reaching scope is that those utilizing the trail will help cut down on area fuel use and air pollution from folks taking fewer car trips.

“For the time it takes you to get to one major part of town to the other – about 20 minutes – you could walk that on the trail to get from A to B, and it would take half of the time,” says Cavanaugh. “The health and wellness of the community is hugely beneficial. This project is just good all-around for the whole community.”