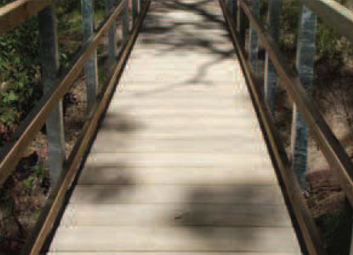 Resistance to vandalism is emerging as one of the key benefits of the Rocla PermaTrak concrete boardwalk system.

Although the system was designed principally for durability and low environmental impact, an added benefit of concrete over timber is that PermaTrak treads can’t be removed or burnt.

This was a critical factor for the National Parks & Wildlife service when rebuilding a track at Awaba Bay, on the foreshores of Lake Macquarie near Newcastle. The timber bridges along the track had been destroyed several times by deliberate fires.

Nine timber bridges, with spans up to 7.5 metres, were replaced with PermaTrak concrete treads mounted on steel bearers. Steel bearers allowed unsupported spans without disturbing the watercourses and middens along the foreshore. The steelwork was fabricated off site and footings and concrete landings were constructed over a period of a month. Lack of vehicle access required the use of a helicopter, which dropped the concrete treads in four hours, then all nine bridges were erected within a week.

Get to Know Your Piers: Timber, Composite, and Concrete Materials