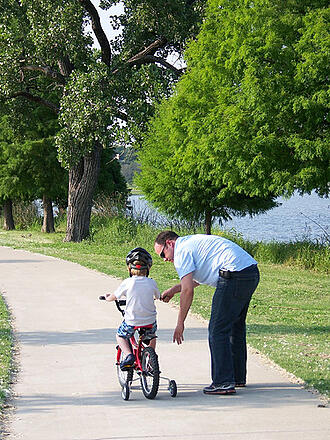 For most of us our early experiences with bicycles involved mom or dad running alongside of us as we pedaled fast and tried to stay upright.

Down the concrete sidewalk we went, across driveways while dodging anything in our way. Eventually we got the hang of it and jumped on bikes without a second thought, a very normal and fun event.

To learn more about bike paths, I spoke with over a dozen riders who spend several hours a week on their bikes. I visited several bicycle stores that sell new and rebuilt bikes. I also chatted with others on the streets, trails and bridges I traveled. When I first asked people about cycling and bike paths, I quickly learned that some are particular about how they are to be referred. As one bike store associate told me, “I’m a cyclist, I don’t just ride a bike.” Another said, “I’m a bike rider,” another said he was a “bicyclist.” To me it appears a cyclist is someone with a higher degree of fitness than recreational bike riders like me. It seems cyclists ride longer and many want to ride faster in furthering their health and stamina. The cyclists all mentioned idiot drivers of cars and trucks. I totally understand. 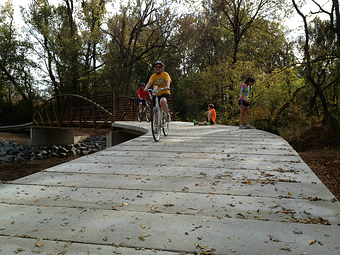 Also, there are various stories that relate a new found value for businesses to locate in cities that include bike path and lane development. It seems that recruiting younger bike riders has proven beneficial to downtown businesses. 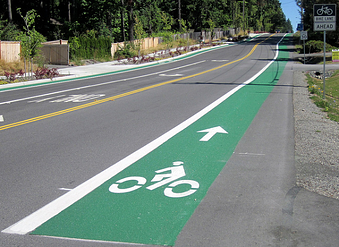 That led to my interest about where the bike riders actually ride, and what their opinions are regarding trail improvements, bike lanes, and awareness of bike riders in general. Many of the road cyclists really don’t think much about trails.  A few said they appreciated the bike lanes created on urban roads, but those lanes are better suited for commuters or recreational bike riders. Cyclists seem to seek faster routes to get their miles in. One cyclist could not even tell me where to find a local or regional bike trail and he pedals well over 100 miles a week. Whoosh!

Most of the store employees were very tuned in to the overall health aspect of biking for recreation. They easily recounted clients that would have bikes, kayaks and camping gear all tied down, heading for the great outdoors. Those riders want the outdoor experience which could include remote trails. Other riders I saw on the roads and bike trails were able to quickly point out new trails and bridges available to riders in the region. All referenced web sites, both public or club run that have details about bike paths that are open, closed or under planning/construction. The word does get out. Washington University in St. Louis just released a study about using cameras and crowdsourcing as effective ways to measure health benefits of public bike trails, greenways and parks. While writing this piece I found many articles and blogs about improvements for the urban bike rider. The City of Minneapolis is focusing on bike lane and trail designs. You can read about their planning efforts for a regional trail system here. 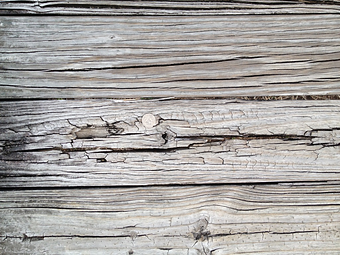 The ability to ride bikes to and from work can be appealing, but it is the recreational bike rider that seems to be most recognized by community planners, agencies and designers. Those who design routes, parks, sites and features that will provide access to anyone on a bike must consider specific bike needs. Paved bike trails are found more and more often, most commonly asphalt or concrete. Sometimes the bike paths are in combination with gravel or at least an improved earthen surface. These bike trails often will need to cross waterways, physical obstacles, or changes in elevation. These locations may require a boardwalk, which may look and perform like a small pedestrian bridge. 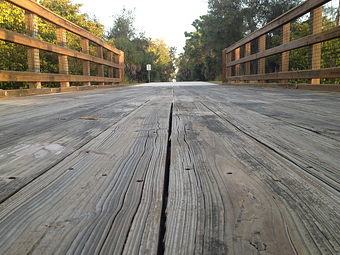 Timber bridge or timber boardwalk structures are most often found on these trails. Initial costs are relatively low; they are generally out of sight and out of mind. Timber boardwalk trail decks can add to the challenges for some riders. New timber planks are slippery when wet. As they age, the timber develops an algae coating, which is just as slick as the new timber. Agencies have found that adding an adhesive non-skid coating, particularly on curved sections, can eliminate the skidding, but these must be maintained or replaced. The ultimate problem for bike riders on a timber trail surface is the constant deterioration of the timber surface itself. The boards start breaking down as soon as they are installed. Splitting, cracking and checking all continues through the life of the structure. Nails and screws loosen and become a hazard and the edges of the boards themselves cause a problem to anyone using the trail. Timber is not the answer for the long term.

Bike paths that are constructed with concrete bridges or concrete boardwalk segments where needed provide a more long-term approach. Several factors contribute to this difference:


1.  ADA compliance with horizontal gap requirements is met upon final inspection once the structure is installed, similar to timber boardwalk or timber bridge structures. But more importantly, the structure can remain in compliance over its design life without warping, rotting, or twisting planks.

2.  Similarly, avid cyclists and recreational bike riders all look for a consistent surface on a bike trail bridge. In order to meet ADA requirements, the change in level from one board to the next must be no greater than ½’’. A precast concrete boardwalk system allows bike trail users to enjoy this consistency from an overall lack of vertical changes every several inches. Concrete boardwalk systems and concrete trail bridges also eliminate the problem of “bouncing boards” as a bike rider passes through a boardwalk section. 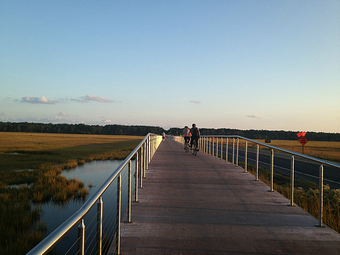 3.  Due to the inherent strength of the material itself, designers can utilize precast concrete boardwalk treads with gaps that run transverse, or perpendicular to the direction of travel. This orientation induces confidence in cyclists and bike riders, and is strongly preferred to gaps that run longitudinally. Skinny road bike tires may tear or knock a rider off balance; this becomes a safety issue.

4.  While frequency of gaps on a boardwalk was looked upon as a non-issue by many of the cyclists and bike riders I spoke with, a concrete boardwalk can offer longer more space from one gap to the next. Common for concrete boardwalk systems is 10’’ or 24’’ spacing in the direction of travel.

5.  The lack of mechanical fasteners present on the riding surface means bike tires won’t be terrorized by nails and screws that pop up over time. 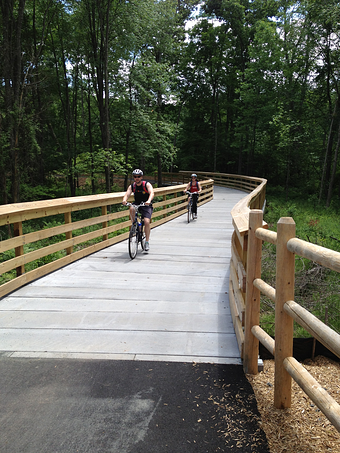 6.  Perhaps most importantly is the lack of degradation in the material over time. Precast concrete boardwalk sections used within a public bike path system gives owners a maintenance-free, durable product that doesn’t require annual staining, sealing, screw tightening or complete replacement after 7-12 years.

One of the cyclists I spoke with voiced an opinion about the riding surfaces of trails. He stated that a concrete surface for a bike trail or bridge is a better surface than most of the other surfaces he rides on. On concrete surfaces he tends to “relax.” When he encounters a timber surface he must focus more on the surface than the ride itself, as he knows there are obstacles to avoid.

As designers, communities and bike riders collaborate on improvements for a more robust bike path network, all have an interest to find safe, cost-effective and user-friendly bike path solutions. Concrete riding surfaces can provide what they all are looking for in improved bike path performance.

See more on PermaTrak's bike path owned and maintained by US Fish and Wildlife at Chincoteague's National Wildlife Refuge boardwalk.

Or read a project profile on Glastonbury, CT's multi use path design. This boardwalk is used heavily by local cyclists and bike riders.

Topics: Multi Use Trails and Greenways